You are here: Home / Technology / Gadgets / Mobiles / Android / 10 Best Music Players for Android You Should Use

It is said that music can do many things what a medicine cannot. Music is a part of life and for someone it is life. It is everywhere and people love to hear music every possible time, let it be the time you are alone, when you are partying with friends, when you are travelling, when your heart breaks down or it a time for some motivation, Music brings life to everything. And for every moment we do have our playlots ready, where ever we are we have our songs to be played ready, and when you are the lover of the variations to the music then you must have the option to sort your playlist with the genres and requirements. For that, I am here in this article will be telling you the best 10 music players that will keep your playlist stored in them and help you to get them anywhere anytime and on any device, you want to. Isn’t it great? Well, lets have a look at it. 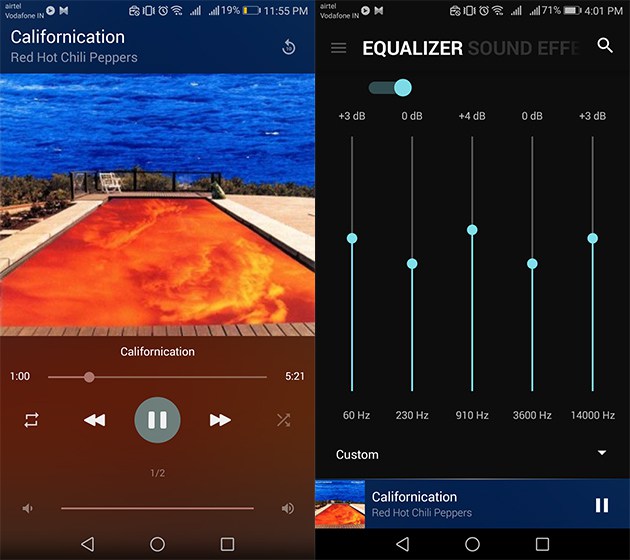 Black player onto its classy name is the very sober and preferential music player amongst the people who love to see the motions with the music they like. The user interface of the player is very simple with sound animations, exciting fonts and solid colours which are customizable as per your requirements. Your albums stored in the player are sorted as per tracks, artists, albums and genre. And the feature I personally appreciate is that it automatically generates the image of the artists of the songs or something related to it. Player also provides you with the 5-band equalizer just to bring customization to your track or any mixing or any part you don’t want to be in the song you can do that editing from there. And with its track properties, playback and back player settings, it is used by many people being the best for them. With this player you can even enjoy the feature of getting a faded transition while changing the sing, this brings the innovation to the era. 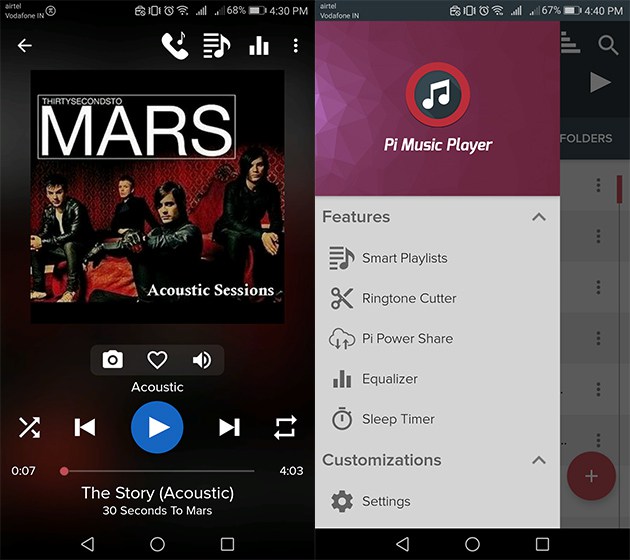 If you are music lover who loves to see the music player’s animations by the time you hear the music than Pi music player is the best option for you. You are offered the themes that can customize your appearance and will sort the track accordingly. This player allows you to make you playlist according to the artist, album and genre and also offers the feature of automatic sorting as per the most played, new add on and frequently played music.

Besides this you will get the exciting feature of Pi power share which allows you to share the file to anyone across any place around the globe. On the other hand you can also make your all time favourite songs as your ringtone by the ringtone cutter. Which is the great feature as everyone wants their song to be played whenever their phone rings. 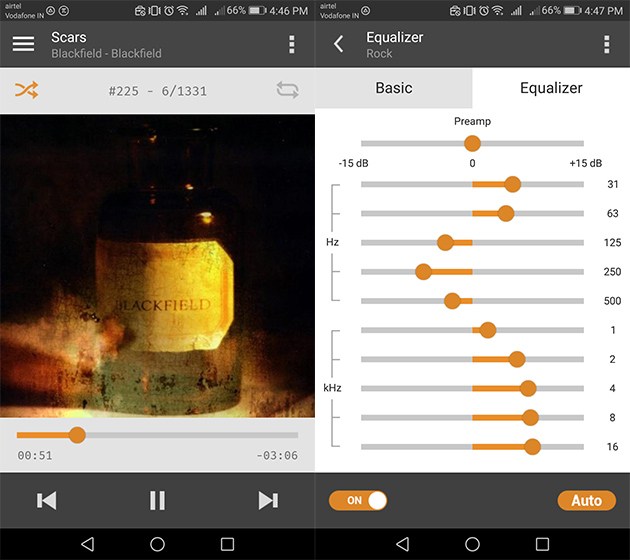 Well if you are the person who just matter with the business and don’t bother about the animations and any other feature just want the platform for your music to be played then AIMP will be the best choice for you. It has the clear user interface as nothing will be interrupting while you were playing. Well it also offers you wide variety of formats as it will be helpful for the people to choose the format and have the listening experience accordingly.

In terms of audio quality, it has the best output to be recorded ad listened. It also comes with 10 band equalizers that will help you to adjust the sound preferences and you can also have control over the speed of the playback and changing of the song. You can also convert stereo files into mono to optimize playback according to the speaker setup. You can also manage audio files, you can transfer them, share them but manual selection of the files could be not acceptable by many. 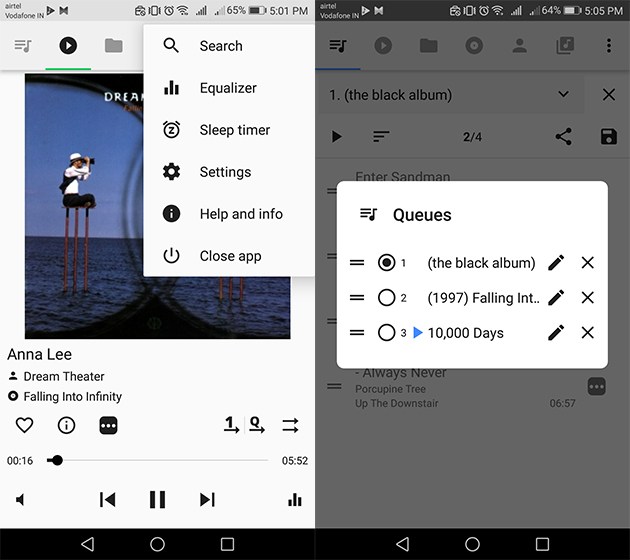 Be the DJ or your group and have the best control over the playback of the tracks. Gear yourself with the features of Musicolet music player and become the holder of all the party and their DJ platform, make everyone beats up on your songs. This music player allows you tp create queues of the tracks that you add and can play them with multiple transition in the between, your audience may not have to wait between the gap of two songs. It also offers the feature of 5-band equalizer with standardized presets that may help you in controlling the bass and surround sounds.

The basic options of changing the appearance and themes is also available in the player. You can optimize the playback speed and can customize the controls of headset remotes. You have the option of adding lyrics of the particular songs and can share it widely to anyone through it only. 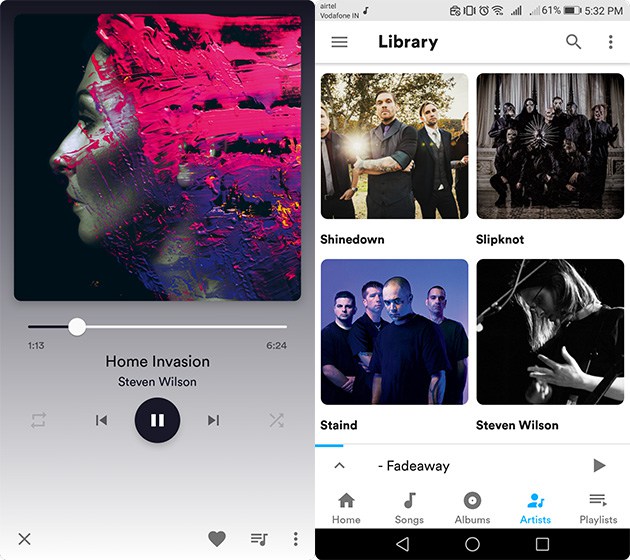 Some users find it difficult to search out for there music among the available track in there phone, but if you want to find your music player to be organised and presented in the manner you can easily identify the songs then retro music player is best for you. Albums and artist are clearly shown in the tiles form on the screen of the music player menu. This makes easy to play the music directly from there. This music player beautifully represents the animation with wide variety of colours and to enjoy that show you can enable the full screen mode which will hide the notification and navigation bars as the app stretches itself for the best experience. Just like many other players it also adds the images of the artists automatically to the album cover, which is a great feature. 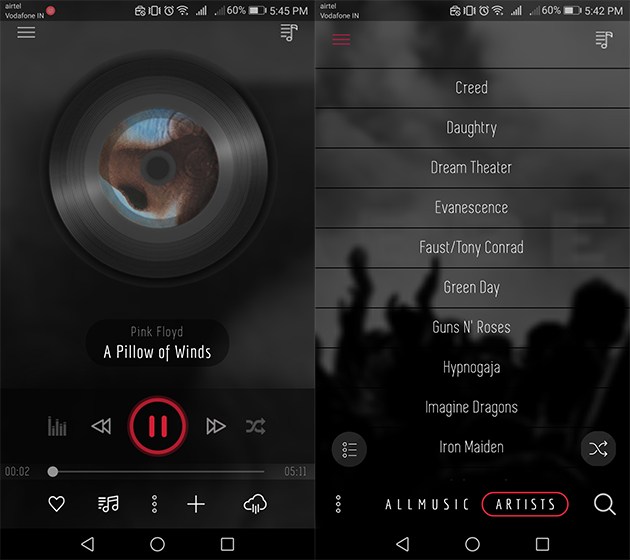 This music player is developed in the theme of historic album by the Beatles which became famous for its iconic cover art featuring the band at a road crossing, other than its design, abbey music player is just like the other music players. All the differs that may be accepted is that it represents the text that is contained by the songs file on the screen and acquires most of the space. By the time you play the song you will see a rotating vinyl disk animation which will amaze you bit can be turned off if irritates.

Music player allows you to make your playlist according to you and can bring the customization in its playing time and themes to be played while paying the songs. Adding other beats between the gap of changing the song will help you to get relaxed. 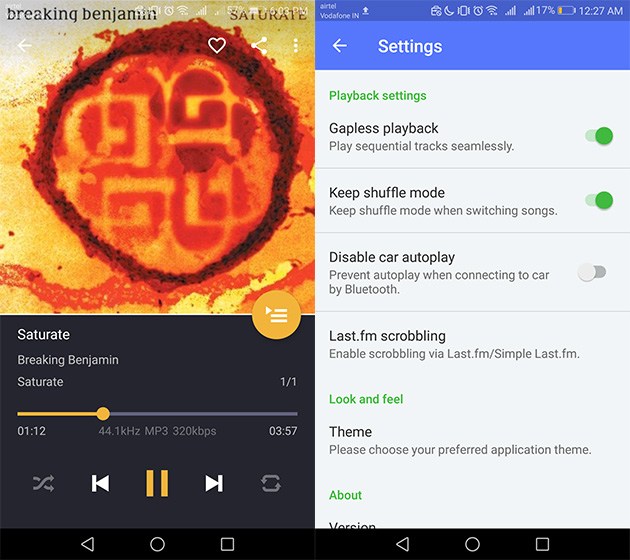 Well if you are the person of simplicity and utility then pulsar music player is the best choice for you. There is nothing much about the theme and preferences to be made for playing the song. You just have to sort your playlist I n the simple design and let them play in the simplistic material design. Pulsar can automatically sync missing album art and artist image and will present on the cover or the playing screen.

A new feature of changing the song can be done by just swiping on the playing screen. 3 basic themes available to be adjusted as per the brightness preferences of the main screen. And if somehow you want equalizer into the player then you may need to buy the pro version of pulsar music player. 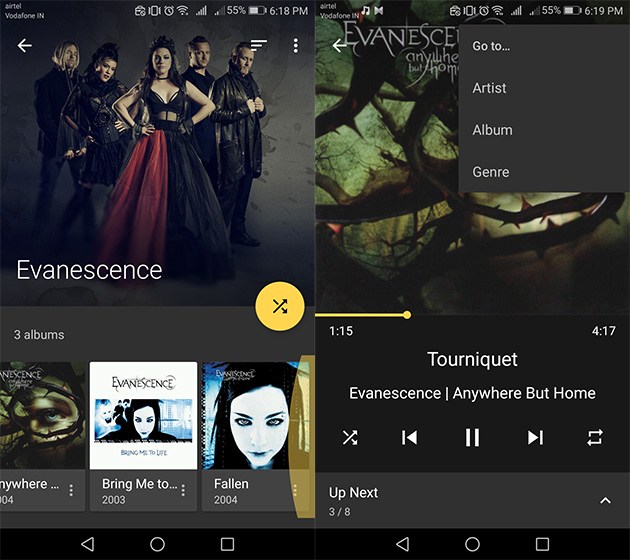 Shuttle is another music player in the list of creative animated themed players. It will automatically organize your albums according to the date it is added and according to the artist as well. You can easily be navigated to the menu directly from the now-playing screen. There are many numbers of colour options to play with and when it comes to accent colours while base colours are limited nothing can match the capability of this player.

Shuttle comes with the 5-band equalizer with a bar to make the strength of the EQ adjustable even by adjusting the bass booster. It also supports the feature of downloading and presenting the album cover from its own. It also offers the feature of operating through the headset you are using , depending on the clicks of the button on the headset. 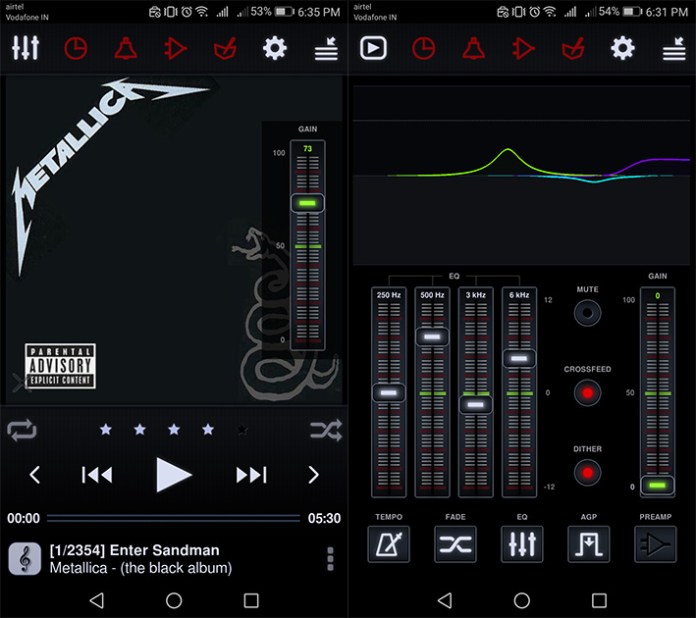 Neutron music player is for the lovers who are the core keeper of their music volume and track there part very frequently as they have the high control over the audio output of their devices far beyond just frequency bands. This music player makes you to play with several parameters which gets club under the DSP effect. For the instant time and purpose, you can add a compressor in the line of effects and can customize he parameters according to you, like attack and release time. You can add transitions within the sings being played just to add more fun and electric feel.

It also allows you to change the playback speed and the volume of the songs as the simple enjoyment most of the time humiliates the human brain. One more feature may attract you toward it is that there is the option you can give 5-star rating to any song, then it will create one more list of the songs that are chosen to be the 5-star by the owner. 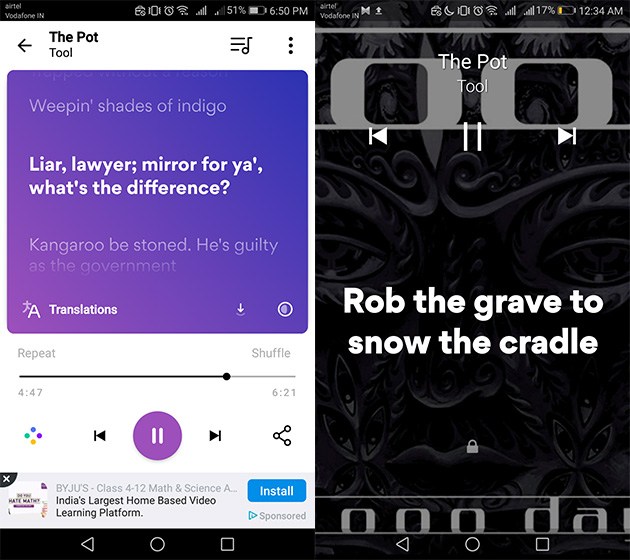 Last but not the least in this vast world, Musixmatch lyrics is the least in design but beast in the performance. The main and the best of the feature of this player is that it automatically generates the feature of the catching up lyrics for the song being played at that particular time. And that’s col as you don’t need to open the browser and search for the same. It appears as the pop-up just to make you aware of the lyrics of the song. That could be irritating, but can be customized.

Problem with the Musixmatch is that, it comes with the ads, its up to you to pay for the premium version or carry on adjusting with the ads. Feature of shazam is also available to you in this player as it will identify the songs being played nearby, not only this it will provide you the link of the music and by the help of this you can also play the music through popular services like YouTube, google play music and Spotify within the app itself.

I hope my article on the best music players for the android users may be the beneficial for them as it was the most common topic raised for the people like us. Stay tuned for more updates and if you want me to make any research on any topic or your query feel free to leave that in comments section below.