You are here: Home / Technology / Can you build an iPhone 6s yourself? Read on to find out!

A programmer on YouTube recently achieved the impossible by building his own iPhone 6s from scratch with materials he procured from the famed Chinese Shenzen markets which have duplicate copies and parts for almost every electronic product imaginable. The man who posted a video on YouTube garnered close to a million views and 22,000 subscribers in a matter of time due to his highly popular video. This is in fact the only video on his channel but it has shot him to huge levels of popularity. 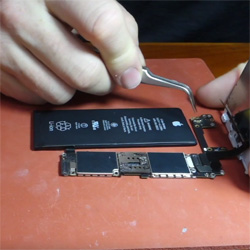 He took the help of a Chinese man named Frank to navigate in the Shenzen markets to procure the parts he was looking for. First he needed a base which he found so without much difficulty. After laser marking his case to house the wires and antennae in a small shop in the market, it was time to look for the other items he would need. After procuring a glass panel, digitiser an LCD panel the duo went to another shop specialising in screen assembly to get ready their iPhone 6s phone screen. They also used a backlight to closely duplicate the iphone model.

After the hardware for the phone was fully assembled, it was time to look for parts such as the motherboard which is the heart of the smartphone. After finding a suitable motherboard, the man tried assembling the rest of the phone on his own but met with his first failure. He then decided to attend a smartphone repair class at an institute which helped him assemble the rest of the phone himself. He still missed a few major components such as the compass on the phone. Another trip to the Chinese markets solved this problem and lo and behold, the iPhone 6s was ready! It worked without any glitches and it definitely did not cost him as much as an original iPhone would have cost!

Watch how he did it here: