In this post, we would like to compare the Apple Watch Series 3 vs Samsung Gear S3 frontier. As we all know, both Samsung and Apple have created a huge market in the watched market apart from the Mobiles. In case if you missed, you can read more about the latest update of Samsung Gear S3 here.

The brand Apple is a well-known brand and popularly known for its own operating system which do not allow any non-iOS device to connect to it. Apple don’t want any outline as it has created its mark in the market of every smartphone, smartwatch and MacBook. Apple is one of best in the market within the Smartphone market everywhere on the globe. The company provides smartwatches with running on iOS, as an alternate and a different and fast operating system designed by apple to the OS used in Android-based smartwatches.

The Apple watch series 3 is launched and is predicted to fulfill the all the desires of all Apple smartphone lovers. One excellent feature of this high-tech watch is its confessedly excellent style and a sleek design and easy grip on our wrist.

The Apple watch series 3 got a 1.65″ display with a screen resolution of 390 x 312 pixels and runs on iOS v10 operating system. The device is powered by dual core paired with 768MB of RAM. it has 279 mAh inbuilt battery. It has an Accelerometer, Compass, and Gyroscope. This watch got a storage space of 16 GB. 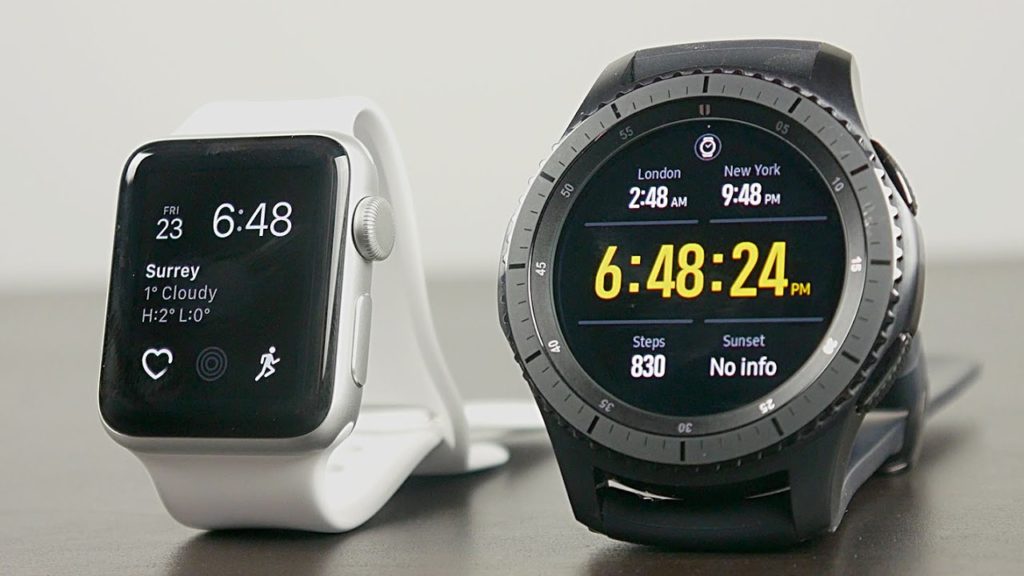 Samsung is the best company in smartphones when it is told about android phones. It is one of best in the market within the android Smartphone market everywhere on the globe.

The Samsung Gear S3 got a 1.5″ display with a screen resolution of 360 x 360 pixels and runs on Tizen-based wearable platform2.3.2 operating system. The device is powered by dual core 1.0 GHz paired with 768MB of RAM. it has a 380 mAh inbuilt battery. It has an Accelerometer, Compass, and Gyroscope. This watch got a storage space of 4 GB.

Unlike to that of Apple watch Series 2, the upcoming Apple watch S3 software come up with OS4.0 and is upgradable to 4.3 with an Apple S3 chipset while Samsung Gear S3 is a Tizen based wearable platform2.3.2 with Exynos 7270 chipset. both the watches are to be equipped with accelerometer, compass and gyroscope and are with Wi-Fi, Bluetooth, and GPS.

WLAN has the following features of Wi-Fi 802.11 a/b/g/n, and a Bluetooth feature of v4.2, A2DP are same in both the watches. Both have an A class GPS facility and a GLONASS browser equipped within it.

Apple watch has an Audio Player of MP3, with a photo whereas Samsung Gear S3 has an audio player ofMP3/M4A/AAC/WAV player with photo viewer, Gear Also got WPC wireless charging.

Apple watch series 3 has an Internal Storage of 16 GB storage and RAM storage of 768 MB while Samsung Gear S3 has an internal storage of 4GB with the same RAM storage. It does not have any External Storage or a card slot for placing a microSD Card. Both have and messaging including all SMS, MMS, Email, Push Mail and IM. 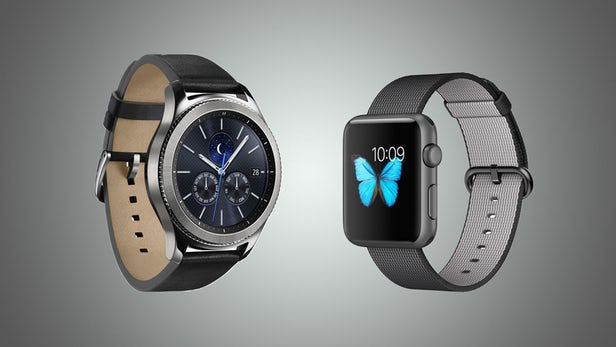 There is no comparison between these watches the Apple watch is more superior in every aspect. It is obvious that an iPhone user would purchase the apple watch the apple ecosystem is main thing here, the apple watch does each and every smartwatch thing better than the Gear S3.

The Samsung watch is a good purchase if you are an Android user, but you have got other options as well naming Fitbit.