You are here: Home / Technology / Computers / DDR3 vs DDR4 RAM: Is It Worth The Upgrade?

If you’ve been looking for a new system to buy or build by yourself, then you must have heard of the term DDR4 RAM. As far as the market is concerned, the DDR3 is still, by far, the most opted-for RAM. The DDR3 RAM has been rocking the market for almost a decade now, but the market has started witnessing the introduction of DDR4 modules. With new devices coming out each day, is DDR4 really worth upgrading, or is it just another expensive latest technology at a better performance than previous? How different is the DDR4 from the DDR3? If the same questions wonder you, then you must follow this comparison of DDR4 vs DDR3 RAM for a better insight. Once you got all the details about the DDR3 and DDR4 RAM, you can get to know why is DDr4 better than DDr3. 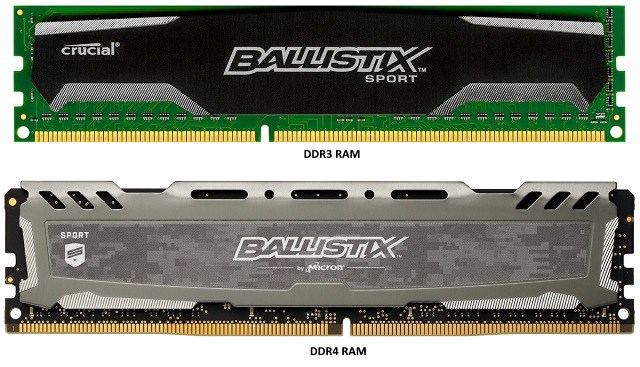 What is the difference between DDR3 vs DDR4?

In real-world applications, DDR4 offering many benefits over DDR3. The main difference between DDR4 and DDR3 is Speed as DDR4 RAM is coming with much higher clock speeds than DDR RAM. Let’s look at the specifications of DDR4 and DDR3 RAMS in details below.

To advance to a newer technology, cosmetic changes are the first thing to happen. The DDR3 RAM used a 240-pin package, while the DDR4 RAM sports a 288-pin package, which directly points to a boost in the bandwidth capacity. Furthermore, since both the modules have the same length, the pin-to-pin distance in the DDR4 RAM has been reduced to 0.85mm, as compared to DDR3’s 1.00mm. This further decreases the overall per-pin contact as well. Well that’s a 15% decrease.

To accommodate the added pins, the modules have been lengthened by 31.25mm, as compared to DDR3’s 30.35mm, now making the routing process easier. Also, the PCB has been given more width from 1.0mm on the DDR3 to 1.2mm on DDR4, which opens the scope for more signal layers.

Power efficiency is another aspect which manufacturers look up to, and there the new DDR4 RAM does quite well for them. As compared to DDR3’s 1.5 volts DDR4 RAM operates at very low voltage i.e. 1.2 only. Well it will not be believed by us but the quoted numbers that end up saving 1-2w per system, which for a fully laden home-user desktop might save upto 15W over DDR3, but for a server farm with 1000 CPUs, this means a 15kW saving. Also, as the demand in market for better battery in systems has increased, deployment of the DDR4 RAM alongside the latest 14nm processors offer incremented usage without rushing for a recharge.

The DDR3 RAM has only a single voltage source applied across the whole module that causes a significant voltage drop, affecting stability. With DDR4 though, things have changed. Now the DDR4 RAM brings a few changes as its new design works by enhancing the lower voltage with the help of voltage reference ICs before each memory chip. This is done in order to ensure that a consistent voltage is applied across each of them individually rather than the whole module at once. With the help of this new design, we have some improved stability of the modules of the DDR4 RAM as all the voltage drops are dependent on the IC only and can be corrected.

The clock speed for a RAM refers to the speed at which the RAM can read or write the data. The clocked speeds stretch the line of the major differences between DDR3 and DDR4 RAMs. Even though for DDR3 RAMs, the clock speed ranges from 800Mhz to 2133Mhz, manufacturers have advanced to ensure that the lowest clock speed is 1333Mhz for DDR3 but the highest limit still remaining at 2133Mhz only. DDR4 RAM, in a way, picks up where DDR3 left off, having the minimum clock speed of 2133Mhz and no specific max value. And a well increase in the bandwidths is what this increase in the clock speeds has brought.

Before getting to know the differences between the refresh algorithms of DDR3 vs DDR4, you need to know some key features of RAMs. There are two types of RAM technically named as Static and Dynamic. The Dynamic RAM, itself get refreshed in the time intervals. It is operated in a synchronous mode, synchronizing within the CPU. Now being clear with that, let us discuss the differences between DDR3 and DDR4.

In general, SDRAM devices such as DDR3 RAM, use auto-refresh (AR) and self-refresh (SR) to refresh its content. Generally, SR is used when idle for power saving, while AR is used when the system is busy while DDR4 implies a low-power auto self-refresh, which standardly refreshes the contents of memory but uses an adaptive algorithm based on the temperature in order to avoid signal drift.

In each module, the refreshing modes will adjust each array independently, since the controller must support a fine-grained optimization routine. This is also done to ensure that the parts of the memory that are being used, coincide with one another. This serves as a power as well as stability insurance for the life of RAM.

For most daily usages, 4GB RAM capacity seems to be sufficient, while gamers look towards 8 gigs of memory and photoshop lovers and high-end graphic users majorly opt for even higher memory capacities. As such, the DDR3 RAM is capped out at 8GB for a single module, while a max capacity of 16GB is available in DIMMs (Dual Inline Memory Modules), which are used in mainframes and workstation systems. But, fortunately DDR4 has no capping over its memory size, thus unleashing the system to store high amounts of data into the memory.

The elevated clock speed and bandwidth come along with an extensive latency as well. The DDR3-2133 brings about a latency of ~55 nanoseconds whereas the DDR4-2133 has a latency of ~63 nanoseconds.

Thus, the latency is really not that high, especially when the clock speeds and bandwidth abstract the drop in latency.

Though benchmarks never give a true testament of actual performances, but they do tend to give an idea about it. We ran a couple of tests to compare the DDR3 RAM vs DDR4 RAM using Handbrake, Adobe Premier, and the PCMark scores.

Apart from the 2133 Mhz clock speed, the DDR4 seems to be marginally faster across the board, although its advantage does wane fairly early on. The difference isn’t too significant, but it’s considerable.

A similar scenario is with the Adobe Premiere CC and Adobe Media Encoder. The DDR4 does outperform its predecessor, but the difference isn’t that big.

Finally, in the PCMark 8’s Adobe Suite, the DDR4 is consistently faster and continues to increment gradually with each speed grade. While the difference between the max capacities of both is very low, just a little bit boost to the next frequency for DDR4 changes things significantly.

Compatibility is an important aspect to keep in mind. None of the RAMs are compatible with the other ones, which has been the case with DDR3 and DDR4 as well. A DDR4 RAM cannot be installed onto a DDR3 port or vice versa. Thankfully, motherboard manufacturers make do mention what RAM does their system support, thus eliminating any confusion. While generally speaking, the motherboards built between 2007 and 2014 are likely to support DDR3 RAM, while models made after 2014 mostly support the DDR4 module.

It’s been a decade now since the DDR3 has been working for us, whereas the DDR4 modules have been here for a couple of years only. The DDR4 is the newer and updated technology, so it’s quite obvious that it would be more expensive as compared to the DDR3. For example, you can get the 8GB kit of ADATA DDR3-2133 for $59.29 only, whereas the comparative DDR4-2133 will set you back at $91.49, almost a $30 difference. Check the DDR3 RAM based Laptops which coming under $350.

As mentioned before, the DDR4 picks up from where DDR3 left, advancing in almost all the aspects. The DDR4 RAMs is definitely a worthy successor. While there isn’t much to differ when both are operating at 2133 Mhz, the higher clock speeds of DDR4 RAM give it a certain boost over the previous generation of RAMs. The higher raw power, combined with lower power consumption make the DDR4 clearly win over the DDR3 RAM.

Is it worth to upgrade to DDR4 from DDR3?

We’ve witnessed that DDR4 does beat the DDR3 RAM in terms of numbers as well as real-world performance. Considering that, it is also notable that the difference between the two isn’t that huge. So, if you’re on a tight budget, investing in a DDR3 RAM of higher memory module with a faster processor and a better GPU would result in good all-around performances. Or if you’ve that extra money in pocket to spend over the newer DDR4 RAM, you would be in no way in a wrong place, considering the fact that it is indeed the future of RAMs. Either way, the switch to DDR4 is unavoidable because you’ll be making it sooner or later.