You are here: Home / Technology / Gadgets / Fidget Spinners – What are they? Are they really beneficial?

Fidgeting makes you healthy!! Generally we find people fidgeting with their finger, biting nails, shaking legs etc. Are these people insane? Not actually it is an activity that keeps their mind going. The same mechanism has been beautifully adapted and a new innovative toy has been developed and it is called a fidget spinner.

What is a Fidget Spinner?

A fidget spinner is a device, a small one that can be used to rotate between fingers. The momentum of the toy provides a sensory satisfaction to the person. These spinners are marketed as an aide to autism, ADHD, anxiety and other such symptoms. These spinners are proved to provide better concentration ability in the child. This toy should be used by children above 7 years.

A fidget spinner can be also called a stress relieving toy. The most basic version consists of a bearing in the centre and can be made of any material like, brass, plastic, metal etc. It is said that the more the heavy the metal the better will be the performance. There are a variety of fidget spinners available in the market, some even lit up when they are spinned. 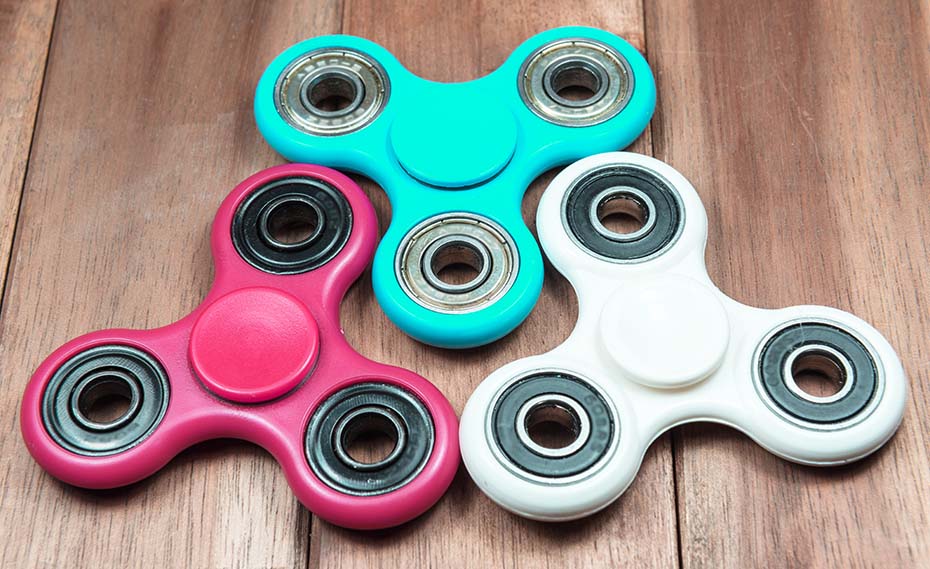 The origin on Fidget Spinners

The original fidget spinners were developed in 1990 as a spinning toy but unfortunately the developer could not market it well and it was a flop show. In December 2016 it was again brought to the market with a special suggestion for people with anxiety, autism and ADHD. In 2017 it has become one of the most selling toys on amazon and other e-commerce websites.

There has been a lot of debate on how beneficial are these fidget spinners. Fidget toys now a day are too popular and especially these fidget spinners. Numerous studies have shown that fidgeting is beneficial for human body. It boosts memory, focus and creativity. A recent study published in the American Journal of Preventive Medicine discovered that fidgeting can actually make you healthier.

Fidget spinners are not only an entertaining toy that spins on your fingers but it also helps you fight stress and anxiety. Also it has become and irreplaceable toy for those who have habits like nail-biting, leg shaking etc. It also helps your kids to distract from phone and IPad and focus on something substantial.

These fidget toys can very well improve out day by giving an innocuous outlet for your nervous and bored energy and the testers found this true. These testers are curiosity for other people around you and this shall boost momentum to get to know newer people around. These fidget spinners can work in a different way for different individuals. From children to adults its effects are varied. You have to try it on your own to find out how good is it for you.

Being the most selling toy in the world, there are a lot of controversies over the use of these spinners. Children or adults people are keeping them busy spinning all the time. According to a few scientists these spinners are quite a useful toy in keeping children attentive in classrooms but the actual status is something else. A clinical Psychologist at the University of Central Florida said that fidget spinners are more of a distraction rather than an attentive tool. Many schools in America have banned these spinners to be carried in school as these spinners distract student from studies.

The claims of its benefits and distraction are still in its nascent stage. There is not any fool-proof research on which we can conclude whether these toys are useful or harmful for the kids. You might have to use it on your own and decide. So Happy Fidgeting!!!