You are here: Home / Science / Giant Shipworm: The unicorn of the ocean

The giant shipworm is accurately called the unicorn of the ocean for two reasons. The first one is its elusiveness which led scientists to wait for more than two centuries to get a glimpse of this giant worm. The second reason is the fact that this shipworm lives in giant shells usually of their own constriction which resemble an elephants tusk or a unicorn’s horn and is about the size of a baseball bat. Kuphus Polythalamia is the scientific name of the giant ship worm and only the giant shell of the ship worm was documented till now. One might think 3 feet isn’t actually very long but the catch is that the giant ship worm is eventually just a worm. Worms usually grow to be a few inches in length but the giant shipworm grows up to 3 feet!

A recent documentary about the Bay of Philippines showed researchers looking for the Kulphus Polythalamia what they needed. Groups of giant shipworms in their long shells were spotted along the shallow bay and researchers immediately collected five living samples of the giant worm. The more interesting part about the giant shipworm was its eating habits, or rather the lack of it. The giant shipworm was already eagerly studied by scientists for their elongated shells but procuring living samples enabled scientists to figure out how they consumed their food which is mainly wood particles and how they were digested. 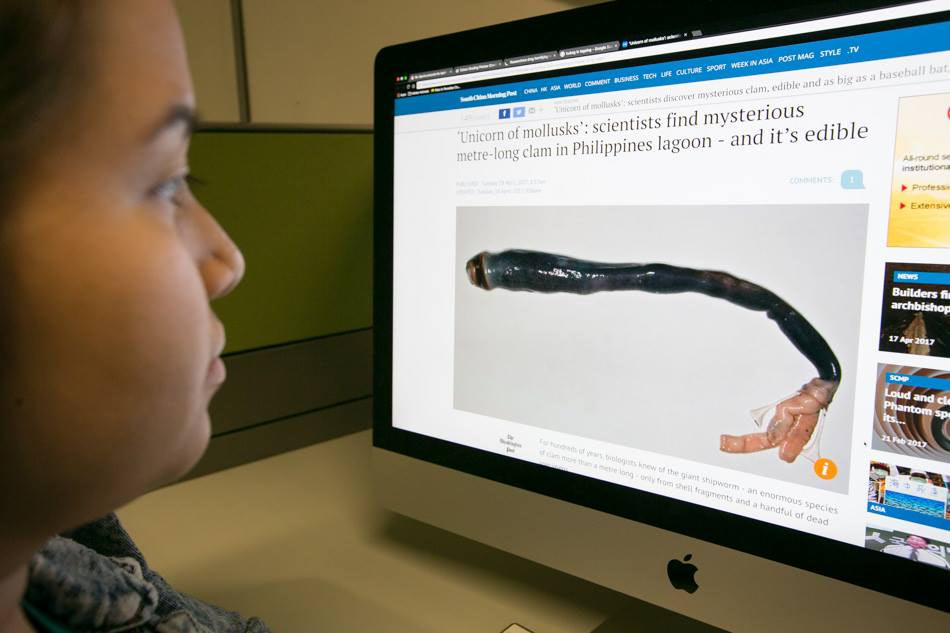 Kulphus Polythalamia has an incredibly tiny digestive tract almost next to its mouth and what is most interesting is that its mouth faces the muddy ocean floor rather than the water. The shallow bay of Philippines is an abundant source of rotting wood which is the primary food for the giant shipworm. The digestive process is one to be studied as it has a tiny digestive tract. The shipworm takes in the water which is full of rotting wood and filters it through its gills which are filled to the brim with a special kind of bacteria which digests wood and forms it into hydrogen sulfide. This is then paired with the main digestive process to form organic carbon for the survival of the worm.

K Polythalamia belongs to the family of mussels, clams and oysters but can grow far more than their relatives owing to an unlimited source of energy through the sulfur diffusion process. Usually worms can only grow to be a few inches in length but the giant shipworm can grow up to 3 feet owing to its unique digestive process. The shipworms are also interesting to study for their one of a kind sulfur symbiosis which is quite rare. The Proceedings of the National Academy of Science published these findings on April 17.