Yet another star kid makes his foray into the movie world. This time, it is third generation Deol, Sunny Deol’s son Karan Deol who is making his debut through the movie, Pal Pal Dil Ke Paas. The director of the movie is none other than the proud papa Sunny.

With the shooting going on at Manali for quite a while now, Sunny who is a recent entry to Twitter has been tweeting about his son. He shared Karan’s picture from the first day of shoot with the words, “Started #palpaldilkepaas .. Karan’s first day at shoot.. can’t get enough.. my boy has grown big #love #actor #life.” The pride he feels is so evident from Sunny Deol’s face in the snap below: 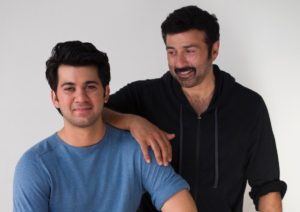 Karan Deol looks all grown up and resembles his dad a lot. Bollywood megastar Shah Rukh Khan has wished Sunny and his son Karan and has tweeted, “All the best papa. He looks as tough and gentle as you. May all good things come his way.” Shah Rukh Khan and Sunny Deol had acted together in the 1993 Yash Chopra movie Darr.

Sunny has also shared an on-location picture with the tweet, “On location!! #brothers #strength #manali #happiness #fulfillment #moments #family #palpaldilkepaas #ppdkp #film #creative #lovemyjob.” It looks as if Bobby Deol is also a part of the movie. He had remarked in an interview to PTI earlier that his priority was working on his son’s film.

The film titled Pal Pal Dil Ke Paas marks the debut of another new entrant. The film is directed by Sunny Deol and produced by the proud grandpa Dharmendra.

While we are yet to see how the young Deol is on the acting front, he sure has inherited his dad’s and grandpa’s charming looks. However, a third generation Deol can’t be so bad in acting, can he? Let’s wait and see.

Have a look at a song from the movie: