You are here: Home / Science / Is there life on Saturn’s Moon?

Scientists on Thursday reported that there may be an existence of life on Saturn’s moon Enceladus. Scientists published an article in the journal Science which stated that Saturn’s moon has all the building blocks necessary for the existence of microbial life in any way. From a microbiologists point of view, hydrogen is the basic building block of life as several microorganisms on Earth itself are dependent on Hydrogen. The presence of hydrogen on Enceladus was detected after geysers of hydrogen were detected to be shooting up from under the moon’s surface. This points to an existence of an Ocean under the moon.

Also read: Lunar Base Moon Village a Reality by 2020?

Enceladus was previously thought of to be uninhabitable as it was an icy cold moon orbiting the far reaches of the solar system. NASA scientists theorized that since basic building blocks are enough for life to evolve like it did on earth. The presence of these elements may mean that life on Saturn’s moon could evolve on other planets apart from earth. Enceladus has the three essential elements. These are essential to evolve life on the moon. This includes water, a food source in the form of organic molecules and energy which is available aplenty throughout the universe.

Also read: Bricks from Martian soil may soon be a reality 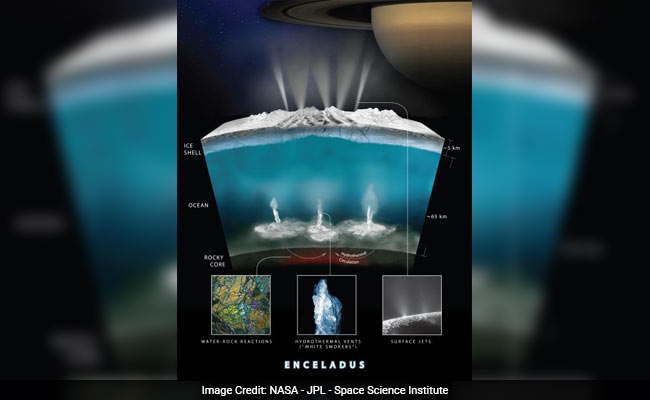 Life on Saturn’s Moon can be possible?

Life itself is very hard to contain as such is the power of evolution. This is evident from the fact that even on Earth we find micro organisms in the most extreme conditions. These conditions like the inside of a volcano to the depths of the ocean floor. If micro organisms can evolve to survive in these extreme conditions they sure could be evolving right now in distant planets and moons as well. Another interesting moon which has been theorized to contain traces of life is Jupiter’s moon Europa. Europa has ice covering it completely and huge oceans beneath this icy crust. Scientists have planned to send drones to Europa to check for life in its huge oceans. Who knows what we may find?