You are here: Home / Lifestyle / Nikki Misurelli, The Global Biker and Travel Lover!

Do you consider yourself an adventurous person or a travel lover? Have you gone on road trips and treks to places no one else goes to? I’m sorry but you still aren’t adventurous enough as Nikki Misurelli. Nikki has covered close to a whopping 20,000 miles from when she started biking. At 30 years old, she has had experiences most of us wouldn’t even dream possible. She has just gone along with the flow and biked wherever she felt like. She has sold off all her belongings and lives like a nomad on the road. Quite a lifestyle it must be for the 30 year old American!

Nikki Misurelli did not start this on her own accord. Ever since Nikki got herself a driving license for riding bikes, she has been zipping around her hometown in Alaska to the market and whatnot. However, she had a thirst for adventure that riding around the city on her incredibly fast Honda CB600RR could not satisfy. This all changed when her boyfriend had the idea of a lifetime: to bike from Alaska to Argentina, a total of 12,000 miles. Obviously, Nikki asked to join her boyfriend and his rider friends on the trip but he refused saying Nikki did not have the endurance to make the trip. Nikki was enraged and broke up with her boyfriend and set out to prove him wrong. Prove him wrong she did as Nikki single handedly went on the 12,000 mile trip from Alaska to Panama. From then on Nikki decided that biking everywhere was her life and sold all of her belongings. She started living a frugal life of a nomad. 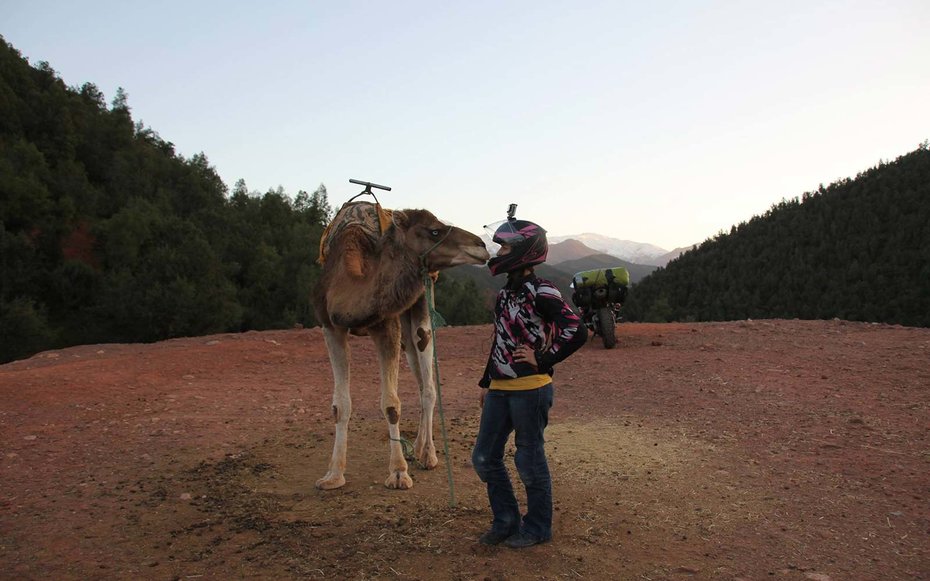 Nikki Misurelli has modified her CB600RR into an adventure bike by adding dual sports tires on both wheels. This helps her have a superior grip on the freeways and helps her cover rough patches on the journey. On this modified adventure ‘tourer’, Nikki was unstoppable and she soon began planning a new trip, this time on the other side of the Ocean, in Europe. Before the Europe trip, Nikki also went on a tour of the West Coast of America and Central America. On her Europe trip on her bike, Nikki went to Italy, Spain, France, Gibraltar and even Slovenia. Nikki even managed to cover Morocco on her trip across Europe.

When she is on her trips, people usually assume Nikki is fairly rich but in reality Nikki just spends her savings on basic necessities. She manages to stay in the outdoors on hammocks and tents on most days. Nikki is truly an inspiration to all the oppressed women out there to break free and take their lives into their hands.