You are here: Home / Technology / Gadgets / Watches / Samsung Gear S4 may shock the world with this new feature – A new Patent hints

March 2018 is about to end and we are eagerly waiting for the Samsung to release its next smartwatch, the Samsung Gear S4. It was expected that the Samsung will lift the curtain at the Mobile World Congress (MWC), along with the Samsung Galaxy S9 and Samsung Galaxy S9 Plus, but it didn’t happen. The whole world is waiting for the smartwatch as it is expected to have some very cool new features and some major updates to the existing ones. Although there is no official word about the specifications and the features of Samsung Gear S4, but rumors and the Samsung’s filed patents do tell a lot about what’s coming.

It is pretty obvious that the Samsung Gear S4 would be having some new health monitoring features, as the healthcare sector is a very very big industry and has a huge scope of development in future. Healthcare being one the major uses of the wearable technology, so it’s pretty sure that the new watches would be having some brand new features focusing primarily on the healthcare.

So, the Samsung Gear S4 is also expected to have some really cool features in this field and so does the Samsung’s patent hints. The Samsung has filed a patent which reveals that the Samsung has figured out how to measure the blood pressure of the human beings with the help of a light sensor. Samsung filed this patent along with an illustration of the watch, resembling the original Gear watches in design. So it is being estimated that the Samsung’s new smartwatch could have this feature. 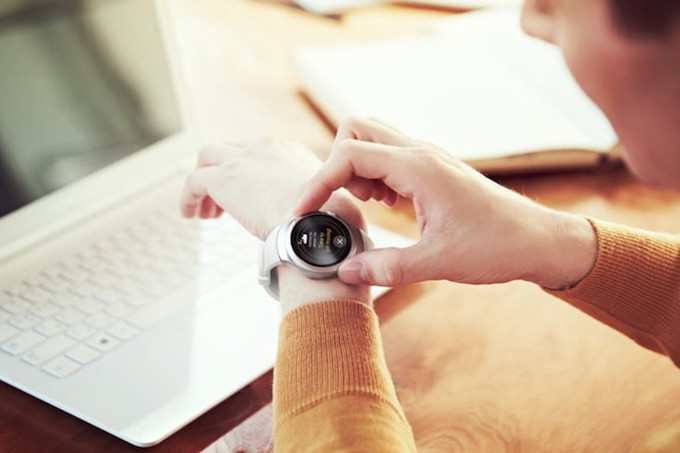 Can this new Patent filed from Samsung will come to reality?

Earlier, Omron’s Heart guide showcased the blood pressure monitoring the technology. But Heart guide has its own method for doing that. It has an extra stiff band that actually inflates to take oscillometric measurements and relies on a process currently used by doctors. The watch manually takes readings with the press of a button but can be programmed to take readings while sleeping at night. But this was not as successful as it was supposed to be.

The problem with the measurement of the blood pressure is the devices are compact and sleek in design. To measure the blood pressure, the device is needed to inflate like the traditional sphygmomanometer. The smartwatches cannot do that as the only reason they exist is they are compact and light. But blood pressure measurement or monitoring is one the major needs of the healthcare industry. So, the South Korean electronics manufacturer came up with an all-new technology. The patent shows the sensor, quite similar to the one used to measure heart rate can be used to do the task. A light sensor can be used to send a polarised beam of light and then sensing the intensity of the scattered light.

Although it seems to be pretty cool but it is not confirmed yet, that the Samsung’s next smartwatch will showcase this. It is quite possible that we have to wait for next in the series to present this feature. As Apple Series 3 watch is already in the market and the Samsung Gear S2 is already a year and a half old, so now is the best time for Samsung to present the new smartwatch. It has been speculated that the Samsung can release Gear S4 in late October . But until then…the only thing we can do is… to wait!

Note: There is no official word or information by the Samsung about any of the facts or features mentioned above in the article. All the information is based on the rumors and the general deduatent has been spotted by the Techtastic.