You are here: Home / Technology / X-37B returns to earth after two years in space: What secret mission was it on?

The X-37B woke up the whole of Central Florida with its sonic boom when it came down for re-entry early on Tuesday morning. This is one of the most secret planes of the United States Air Force. The plane was on its OTV-4 meaning Orbital Test Vehicle Mission 4. The United States Air Force has two of these X-37B planes which are manufactured by Boeing. These planes look like the miniatures of the Space Shuttles from the era of Atlantis and Columbus. Measuring at a height of just over 9 feet with a length of 29 feet and 3 inches, this unmanned aerial vehicle is tiny compared to the space shuttles. These planes have been used thrice before by the air force for secret missions. Read on to find out more. 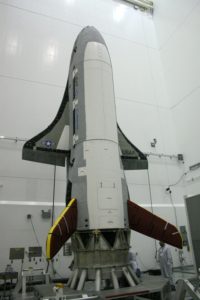 The U.S. Air Force has two craft capable of re-entry, both being the Boeing X-37B. These planes have been used on a total of four missions till date with each mission longer than the previous one.  The aircraft was first launched in 1999 with the Orbital test Vehicle Mission1. The OTV Mission 1 spent 224 days in low earth orbit without any real clue as to what its intentions were. The second mission followed soon after and spent a total of 468 days in orbit before re-entering the Earth. The third Orbital Test Vehicle Mission lasted for a whopping 675 days after which it returned back to earth just like a shuttle. These missions were all launched using rockets to insert them into orbit by the Air Force.

The Orbital test Vehicle Mission 4 is the longest running mission ever run by the Rapid Capabilities Office of the Air Force. The mission lasted for a total of 718 days which is more than two years in the vacuum of space. The OTVM-4 started as a NASA project but was transferred to the Pentagon in the middle of the mission. This raised doubts over the use of the spacecraft for military purposes. In 2015, before the launch of the OTV-4, the Air Force revealed the payload the X-37B was carrying. It included a science experiment for NASA and an ionizing thruster being tested for the Air Force. This temporarily cleared up doubts about the purpose of the OTV missions. 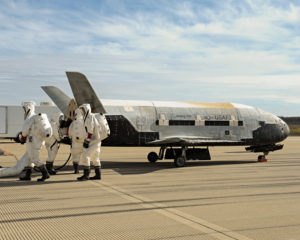 Speculations about the mission

Even though the Air Force revealed the X-37B’s payload, it has not made any statement to tell the public the purpose of the spacecraft spending more than 2 years in space. Most theorists believe that surveillance is the most plausible explanation for the X-37B’s time in space. Since the craft was in low earth orbit, it would have been easy to maneuver it to wherever the Air Force needed surveillance. There has also been speculation that the aircraft might have been used for spying on China’s space station. The Chinese Space Station, Tiangong-1 however had a different trajectory which would make it impossible to track in close quarters.

We may never know the purpose of the OTV missions but we can only hope that it was used for ethical research purposes and not for military purposes. What do you think about the mission this craft was on? Let us know in the comments below.