You are here: Home / Lifestyle / Woman wears her Engagement Ring in a chain for a year without even knowing it!

The day of her proposal is a special day for any woman. For a man too, it is a special occasion. Every woman expects that occasion to be a well planned, romantic affair. There are men who opt to propose in a well-crowded stadium in the middle of a match with the camera spotlight on them. Others who choose to hide the ring in a cake or something similar and tend to surprise their love of their life. There are men who get down on their knees during a candlelight dinner at a restaurant and others who choose to do it in the privacy of their house.

Terry hide the engagement ring in the necklace

This Australian gentleman did things differently. Less than a year after Terry started dating Anna, he knew that she was the one for him. He loved her and wanted to marry her. It did not take long for him to choose a ring. He gifted her a necklace made out of Huon pine(a wood native to Tasmania) for their one-year anniversary in 2015. Unknown to her, he hid the engagement ring inside the locket. Anna was wearing the necklace for more than a year without being aware what was hidden inside it.

Terry chose to propose to her when they went on a trip to Smoo Cave in northern Scotland in November 2016. He chose that occasion since they had often talked about visiting that place and more so since the word ‘smoo’ meant ‘hiding place’. An apt occasion and an apt place, isn’t it?

Terry borrowed her necklace to take some pictures of it on the rocks. He then broke open the seal that kept the ring concealed. Then he got down on his knees and proposed to her with the locket cracked open. While it took a few minutes to understand what he had done, she was ready with her reply ‘Yes”.

When she realized that the ring had been hidden inside the locket the whole time, she exclaimed with exasperation, ‘Wait, it’s been in there the entire time?! I could have lost it, you f—— idiot!’

Terry documented the whole thing as a video and posted it on YouTube. It is no wonder that this became viral. 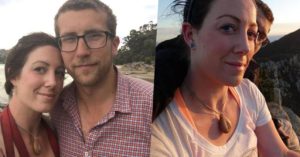 The couple is planning to save up for a home and have their wedding ceremony there along with friends and family. I am sure that Terry will have a few more surprises up his sleeve for the wedding as well. Let’s wait and see.